Some people think influencers are entitled, freeloaders or fakes. Instead of comping an influencer or paying for her work, they're publicly exposing and bashing them – using the influencer's popularity to capitalize on their name and followers for free. Really it's another spin on polarizing marketing which I've written about before (these happen to be Utah businesses, like the kilt and gun toting waiters the pro gun ice cream shop or the smoothie shop who charged liberals more than conservatives). This isn't new. What's new is I'm seeing more businesses or even other influencers lash out against social media stars.

Take the recent episode when vlogger Elle Darby pitched The White Moose Cafe owner Paul Stenson in Ireland if they would trade some night's stays for some publicity. This is a normal request that could be ignored or politely turned down, but not from this guy. Instead, he published the letter with a snarky response and turned his disdain into a PR campaign. It's not like the owner doesn't know what he's doing – he's an influencer with a larger following. This is an influencer being malicious towards another influencer who has a history of bashing people (not just influencers) who say anything negative about his business. Basically, he's a bully.

In this case they went to the length of making a video to make fun of influencers. At the end of the video, titled, House of Influencers. the actress turns to the camera and says, “one thing we should never ever forget: sell your soul.” Then he banned bloggers from the hotel, created t-shirts about it and is sending Darby an outrageous bill for the publicity they gave her.

Darby responded in an emotional video that's now been viewed over 2 million times. I hope she's making bank on the ad revenue (to quote one of the original “mom bloggers” Heather Armstrong: “monetize hate” after she famously put all the worst hateful comments as a page on her blog and put ads on it). She's since turned off comments.

Influencer Bashing Heats Up in Utah

Utah has its own influencer drama with a similar playbook. We've been famously called out for the high number of Mormon housewife blogs. I call it the mothership. We have a lot of young moms with little kids who took up blogging or social media accounts to share their lives. Some of them ended up gaining followings, getting approached by brands and turning into a business so profitable, their husbands quit their day jobs to be the cameraman.

Instagrammer Collin Kartchner is an influencer who makes fun of influencer culture. At first he's funny and he looks like a good guy – he does things like raise money for kids with cancer and hurricane victims (you know, to hide behind a nice guy exterior). Ironically, he's married to Utah influencer: Elizabeth Kartchner, aka, Dear Lizzy who pushes product with the rest of them (kids in tow). There are near perfect bod swimsuit pics and Insta stories with where to buy them. Normal stuff. But somehow no one's pointing fingers at her…she's not a Tiff.

To me Kartchner is the worst because he's running a racket by pretending he's empowering women but really he's just tearing down the women who don't fit how he thinks they should run their business. At least the other guy never pretends to like anyone or stand for any substantial causes. Kartchner is sharing messages from women who agree with him most likely without knowing how damaging his cause is to women.

Kartchner made up his own word, “Tiff”, says a Utah influencer who doesn't wish to be named because she's tired of being targeted by his followers (which he nicknames collowers). The word means a blogger b**** or a woman who is fake, thinks she's more righteous because she's rich and who sells an impossible standard of beauty. He refers to Tiffs as sluts, as in “Tiff you slut”, which as she says, “is kind of disgusting and degrading to women…”

“…he’s only reflecting positive on his stories…but I assure you MANY a girl has been personally victimized by him and I’ve talked to numerous girls now who he has publicly made fun of to his followers. He will take screenshots (or have his followers send him screenshots) of influencers and he will post them in his stories making fun of them. I’ve been in his stories before and I didn’t even know who he was and was only notified he was making fun of me by one of my followers.”

She goes on to describe how he calls out women he thinks are perpetuating a myth of perfection and impossible standards of beauty. He doesn't entirely hide the names of the women he calls out which is an invitation of sorts for his followers to gang up on the women and leave nasty comments. He's even asked them to send him videos of themselves making fun of bloggers so he can post them. How's that helping women be more authentic? I think it's helping them be mean which unfortunately is what the internet can do quite well. I'd like to speak out against that!

“He is pure negativity and cruelness, cleverly shrouded in fake love yourself, empowering messages purely for his own gain and growth,” she said.

Somehow influencers are partly or mostly to blame for serious societal issues: 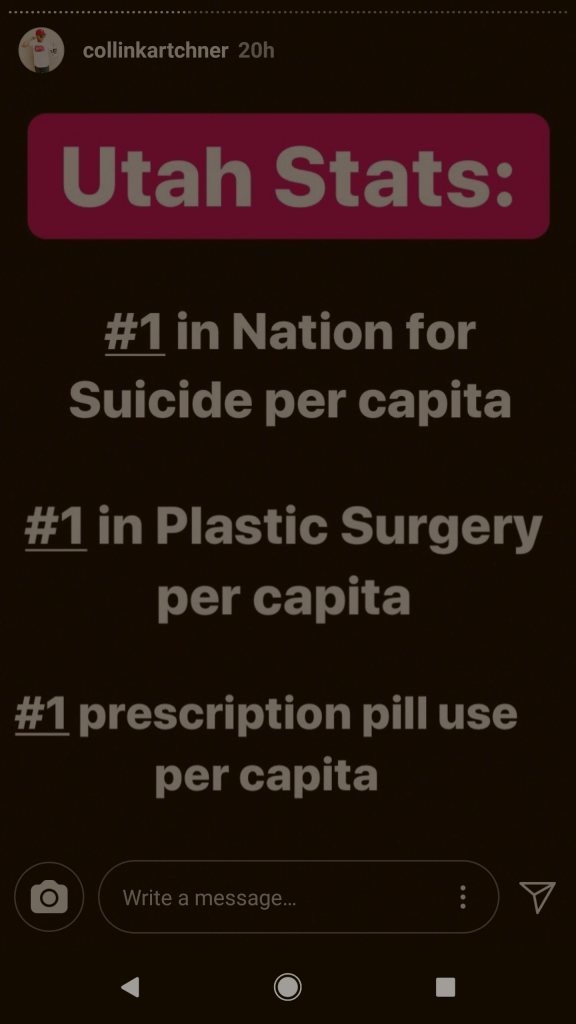 How does leading an army of meanness solve any of these problems? Take this study by Pew Research about the effect of severe online harassment.

Those with severe harassment experiences are also more likely to report a strong reaction to their abuse. More than four-in-ten (44%) say their most recent experience caused mental or emotional stress, 44% say they found the incident “extremely” or “very” upsetting, and 29% felt their physical safety (or the physical safety of those close to them) was at risk. Those who have ever been targeted with severe harassment behaviors are also more likely to feel high levels of anxiety when they witness others being harassed online, more likely to actively protect themselves and their online identities in response to online harassment, and more likely to seek support from a number of sources.

If you've experienced online harassment you're more likely to intervene when you see others going through it. We all react differently. Some can let more roll off them but others experience trauma, like some Utah bloggers who've privately revealed that they've become suicidal over it.

I've been there too. Negativity is part of the business and you deal. It's entirely different when it's an organized army against you over a prolonged period of time. Maybe that's why I feel so passionately about speaking up. I never think it's empowering women to tear other women down. Whether it's coming from Martha Stewart, Reese Witherspoon or this guy.

Influencers: Women Who Own a Business

We follow influencers for a lot of reasons. Maybe it's to see a certain lifestyle we relate to or want to attain. However, we should see them for what they are (or not). They're not on a staff with an editor and a salary which to use for that killer wardrobe. They pay for it or it's sent to them by advertisers. They're not paid to be objective and honestly, we want their perspective. That's why we follow them.

Some have little to no business experience or profit (just like other small business owners) and others have turned their influence into a multi million dollar business. For some insight into who bloggers are and what they make, check out this study by ConvertKit but I'll summarize: they're mostly white women with children. Income roughly follows the 80/20 rule. Most earn less than $72k per year or don't earn up to half of the household income through blogging.

Regardless, we're business owners and that means we make a living from our visibility. A lot of what you see are ads or marketing for products — ours or someone else's. That's how we pay the bills. I think it's empowering and I'm inspired by women who make a living at it because there are many more who try but can't.

As for perfectionism, look at food bloggers. They spend hours preparing food and photographing food with expensive equipment and expertise. Behind that camera of a gorgeous kitchen could be a total disaster or it may be as amazing as it looks on YouTube. But when you make that dish at home, do you expect your final product to look as good as the one she shows? No! Same with real life! We show what fits our brand and not the rest whether our brand is to be authentic and show the not-so-glam life as a mom or a fashion blogger with a perfectly styled shot of the outfit she's wearing. 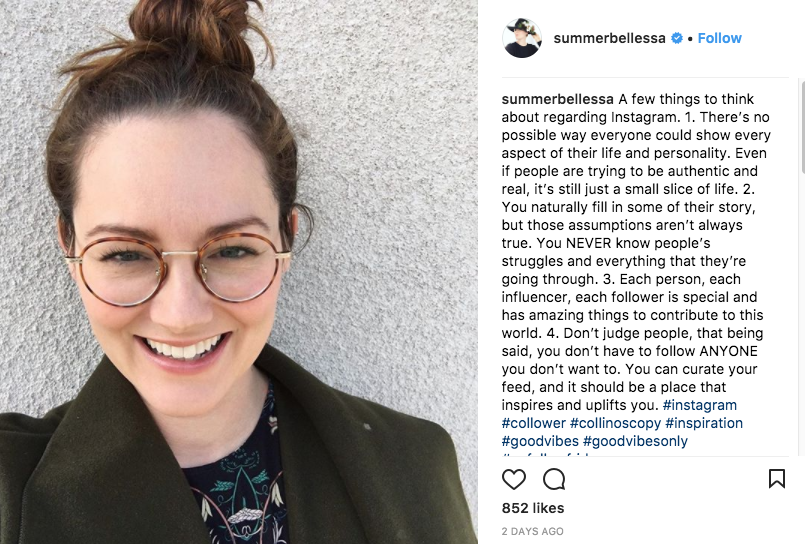 A few things to think about regarding Instagram. 1. There’s no possible way everyone could show every aspect of their life and personality. Even if people are trying to be authentic and real, it’s still just a small slice of life. 2. You naturally fill in some of their story, but those assumptions aren’t always true. You NEVER know people’s struggles and everything that they’re going through. 3. Each person, each influencer, each follower is special and has amazing things to contribute to this world. 4. Don’t judge people, that being said, you don’t have to follow ANYONE you don’t want to. You can curate your feed, and it should be a place that inspires and uplifts you. #instagram #collower #collinoscopy #inspiration #goodvibes #goodvibesonly #unfollowfriday

Maybe it's not obvious to everyone that these are photo shoots and influencers are professionals. So I suggest that, in addition to the regular disclosures about sponsors or the use of affiliate links on influencer's posts, their should be a reality check disclosure. It could read something like this (or here's my favorite disclosure from Shoemoney's blog):

Actual time to do makeup and hair: 2 hours with a stylist I pay $125 an hour. Photos stylized and meant to portray a certain aesthetic that's not entirely real. Professional lighting and camera crew along with heavy editing used to portray a certain look. Spent 10 hours filming and 20 editing plus $20k worth of equipment and a paid staff that includes my husband and oldest daughter. Do not attempt this at home or compare to real life. My life sucks at times too. After this shoot I'm taking off the makeup and not leaving the house for the next 3 days so I can spend some time offline with my kids. Oh yeah and I employ a part time nanny.

Maybe this is just a correction, a bubble that's letting out some air because this whole thing is overdone and it's getting old and tiring. No matter. There will always be influencers who make a living being one. Hateful comments are often part of the cost of being so visible. Regardless of who's legit and who's not, they don't deserve to be bullied and harassed. I hope it stops.

If I had a t-shirt it'd read, spread kindness online. We need a lot more of it!