Last year I worked with Purple in Alpine, Utah to create their affiliate program and partner with bloggers to help publicize their new mattress. At the time, bed in a box mattress companies were new. People were intrigued with the idea of ordering a mattress online and having it arrive at their doorstep a week later. Purple tried to arrange for a film crew to come and film us talking about what we thought of our new mattress but our schedules never worked out. Finally we decided to film our own video, which started a new part of my life and business that I never anticipated… 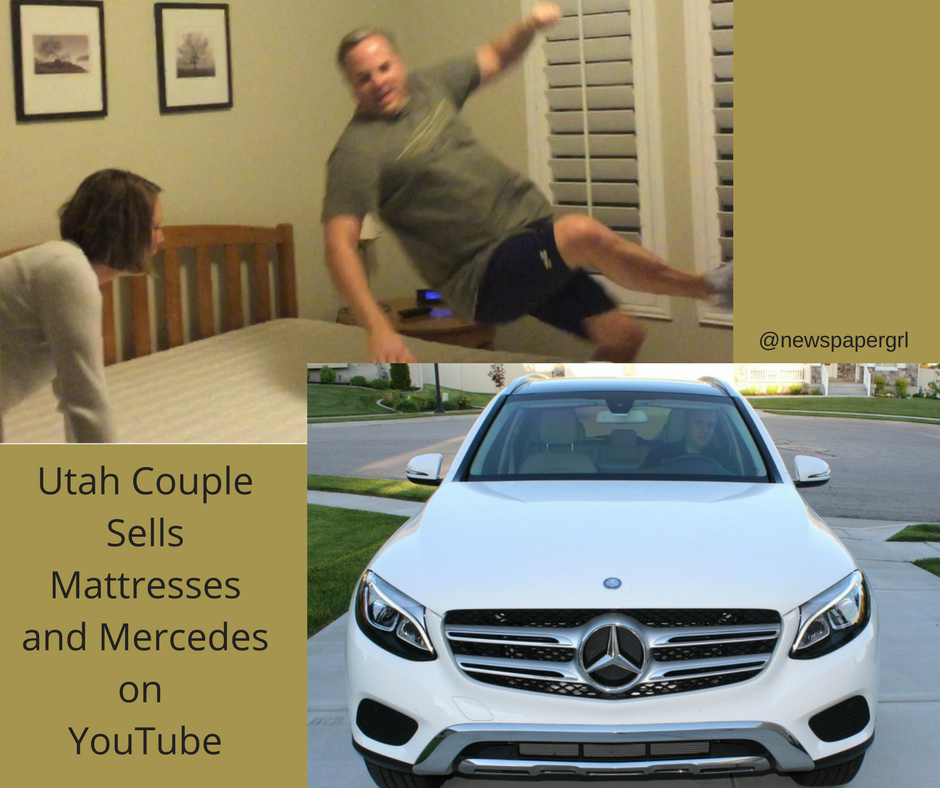 Prior to this we had little prior experience with video. I literally handed my teenage son my phone and asked him to record. It wasn't even in HD. The lighting wasn't good. It wasn't edited, but we had personality and we had fun. I uploaded it onto YouTube and didn't think much more about it. A year later the video has over 225,000 views. Not only that, people buy mattresses because of it.

We've since filmed a mattress review video after sleeping on Purple which has almost 40,000 views in 4 months. We don't have a popular channel and we don't upload videos frequently. Still, I've been recognized by a complete stranger who watched the video when they were looking at buying a Purple mattress. So I'm a tiny bit famous.

It's the first time in my life that people asked me mattress buying advice. People I didn't know or haven't talked to in years started to message me about our mattress.

I'm used to the idea of selling mattresses with YouTube videos. But could we sell something worth over $30,000? Could we sell cars? Honestly, that wasn't our motivation. My husband Stephen spent the past year trying to decide between an Acura or a Mercedes. He wanted a family car with 4-wheel drive and a small size SUV. He went back and forth and finally decided on a Mercedes. There wasn't a lot of information on the car we picked. As we drove it he pointed out the pros and cons. My answer? We should make a video and share that with other people in our situation.

Here's what we finally recorded after many hours of editing. It's much improved as you can see, but I'm still learning.

I shared the video on Facebook and that was the end of it until Stephen took the Mercedes into the local dealer for regular maintenance. The sales manager recognized him and personally thanked him for our video. He also told Stephen that they had several people buy cars after watching it! I was floored. It barely has 1,000 views on YouTube! However, we're friends with people who are in a similar age and income demo and the video resonated with them. Too bad there's not an affiliate program for selling cars! I think we've made $3 total in ads from it. Still, I'm proud that our video worked. No big numbers. Yes, I have a strong network on Facebook especially but again, my goal wasn't to sell cars. It was to get better at video and share what we learned from driving it.

Marketers can get so wrapped up in big numbers that they underestimate the effect of micro influencers. I've seen bloggers or YouTubers with far bigger numbers that make far less in terms of sales. We reach a higher income buyer in their 40s and up. That's how my in-laws ended up moving across the street when we built our house a few years ago, but that's another story!

I use software like Tubebuddy to help me rank videos. That along with my SEO knowledge really helped me succeed despite having a small channel. I'm not a power user yet but what I know has been invaluable. Tubebuddy's keyword suggestions and search tool are so helpful.

To help publicize my blog posts and videos I use Missinglettr. It's a very simple and fast way to schedule a new blog post to be shared multiple times with different combinations of images and text that they pull from my posts. They get posted for me on Facebook and Twitter all year. When I publish this post it will create a series of tweets and Facebook posts that I can accept or edit. It even pulls in photos and image quotes. It's more than doubled my pageviews and that's increased sales.

If Stephen would agree I'd do more videos together. He's my favorite person to film with and we make a good team. We need to do a steam cleaner review and one of our favorite pan set next. I'm hoping I can get that done in the next 6 months.

Next month I'm going to CVX Live in Salt Lake to learn how to improve my YouTube skills and to meet famous YouTubers. To be honest, video started out being scary to me. I can see my heart pounding in the Purple video. I was so nervous that it was hard to think or talk straight – just like I feel when I'm on TV.I'm more the wind beneath your wings type and like promoting other influencers. But like anything video gets easier the more I do it.

I really love to feature products or services that otherwise people wouldn't know about or think they need. I like what some might consider boring products that can be made entertaining and informative. Up until this year I've been bullish on blogging and preferred to write than being filmed. But being a marketer I have to look at what works and video is working.

For me, YouTube is a more effective and faster way to make an income than blogging has been but they're best together. Blogging helped me build my reputation and still brings clients. But YouTube creates more passive income that pays far more than ads on my blog ever have. Thanks to other YouTubers who've taught me so much and my experience with Purple, I got to quit my part time job and now run my own business. It's been two years now and I feel like I'm still just beginning.